The Ancient Pathways are Open 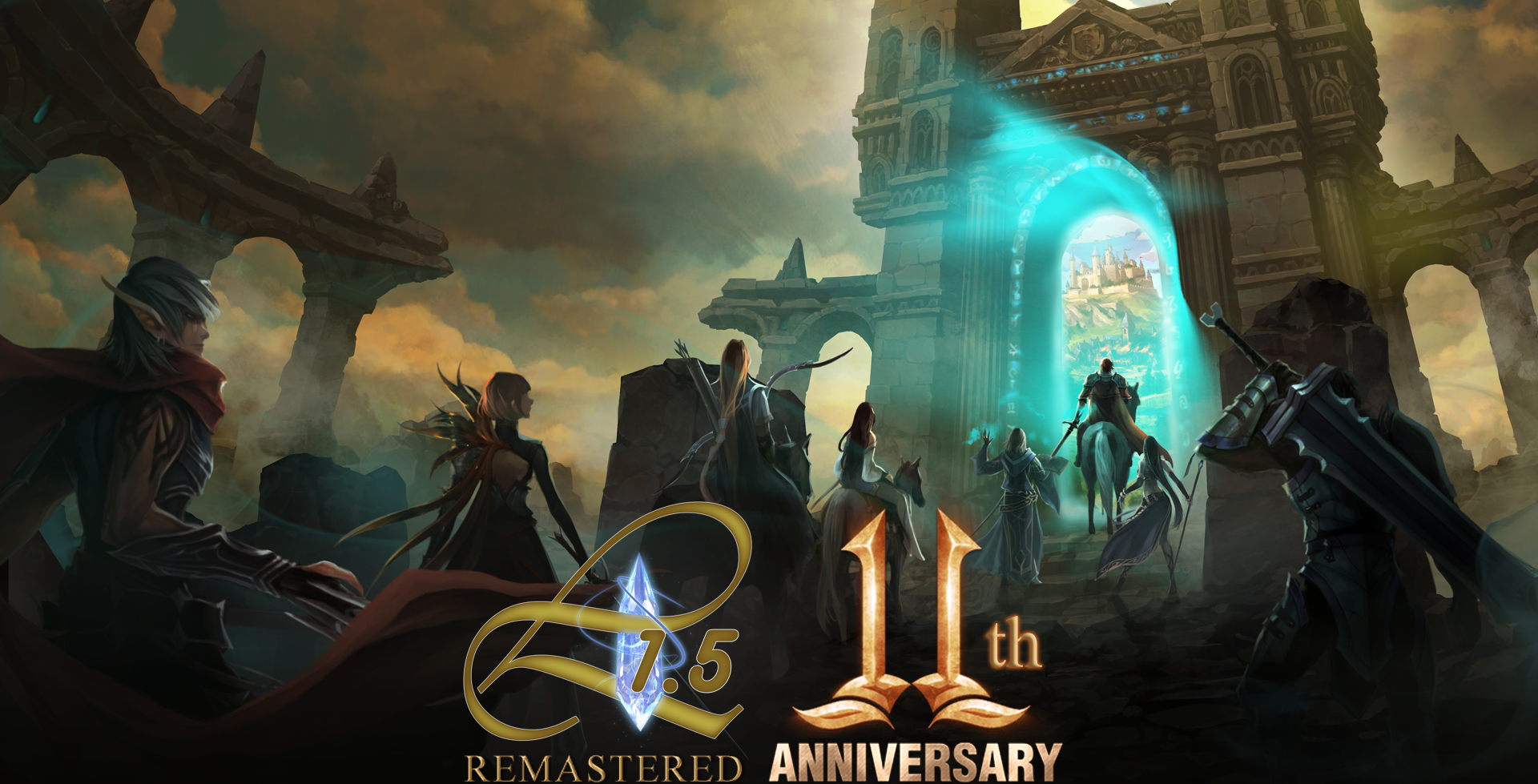 It’s been 11 years since I spun this server up. 11 years of very consistent development. 11 years of new events, new content, new players, new drama, new game clients and over 99.999999999% uptime! When I started this server as a hobby I never expected it to become my full time job let alone that I’d still be working on it 11 years later. You have all been with me from the time that I met my wife, the birth of my 3 children and throughout the years they have been growing up. I’ve continued to grow as a person, a husband, a father and of course a GM over the course of these many years. My interactions with all of you have helped shape who I am and the course of this game.

From the start, I wanted to do something different. I didn’t strive to be a clone of the original Lineage. That was something that most of us have already played quite extensively. My goal was something different, something new. So at first, I played around with the idea of adding content from Lineage II into the Lineage 1 client. This was where the name L1.5 came from, an in-between stage for the two games. However I branched away from this pretty quickly due to having too many of my own ideas and stories I wanted to tell through content added.

This game has come quite a long way, and by no means am I finished telling the stories I want to tell with it. The next story to tell, you guys have been able to play for the past few weeks, but now I’m ready to announce it in full details.

While some like Baium sought to build a tower of insolence to the skies above to try to reach the Gods. Others knew that this was impossible and that the pathway to the Gods was not up, but through dimensional vortex. Lord Kelvin one of the elites of the Ancient Sky Kingdom, developed such a pathway through the vortex, using a series of 11 platforms. When he finally managed to get them to work he traveled through the vortexes and after the 10th one found what he was looking for. The Gods themselves! Gran Kain saw Lord Kelvin and while out first outraged at the audacity of such a crime, quickly calmed himself.

“Why do you come here mortal? What could you possibly hope to achieve by entering into our realm?” Gran Kain asked.

“I come to ask for the power to change the world.”, responded Lord Kelvin

“Hmm, very well. Your punishment shall be granting you that which you seek. You will have the power to change the world, however you will be trapped in the world that you created, forever guarding and preventing anyone from committing such a crime as you have done.”

With that Gran Kain snapped his fingers and Lord Kelvin began to cry out in pain as his body became a vortex of constant changing. Moments later he found himself back in the platforms he created as the world twisted around him. When he finally was able to stabilize his matter for any amount of time he sough to try to find his way out of the platforms but every time he got to the end, he found himself at the beginning. Each time he went through, every platform he entered changed and creatures began pouring through the portals.

This is when he realized that he was forever doomed to guard these pathways he created. Hundreds of years later, the entrance to this ancient pathway has been revealed and challengers have begun traversing these platforms to try to reach the Gods.

The ancient platforms is a new system where you are able to traverse the platforms as far as you can. There is no limit to your platform level, the only limit is your character’s ability to kill the enemies and survive.

You can enter the ancient pathways by going through the Ancient Vortex located in Valhalla (-shop) near the north corner of the map. 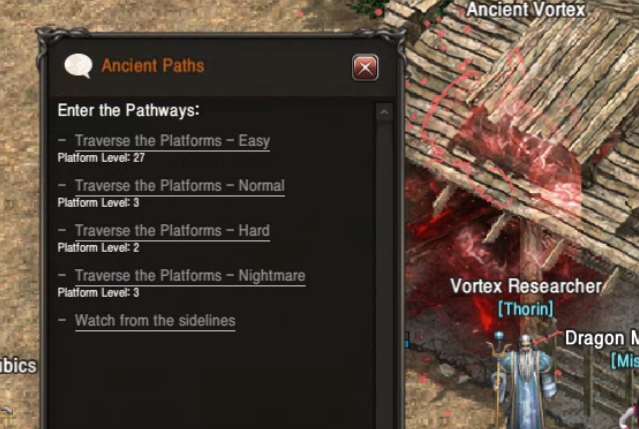 Clearing a platform of all other living creatures will allow you to continue through a vortex to the next platform, which advances your “platform level”. You can see your current platform level near the map (as shown in the picture below), when entering the platforms (the picture above) or in the event info window acessable on the right side of game ui.

The difficulty of each monster that spawns when you enter a platform is increased by your effective platform level (see below) and the round number. There are 3 rounds or waves of monsters that spawn on each platform, each round progressively harder than the previous. This difficulty increase is in the form of Penetration and Resilience stats.

Your platform level is saved even if you leave the Ancient Pathways, however you will always start from the first platform in the series of 10 platforms (the 10th being the double platform boss area).

Other players on the platforms...

PvP in this area utilizes the new Battlegrounds PvP system, allowing for a more fair and balanced fight. This system while very beta is being updated and improved overtime. Magic has been added to this system and with an upcoming patch should reflect int and wis damage and resistance bonuses properly allowing for a more competitive fighting style different for each style of play. See the details about this system in the post here: Battlegrounds PvP System Details.

Rewards for Traversing the Pathways

Of course if you’ll be doing this, you’ll need proper motivation and rewards. Not only do the monsters on the platforms have decent exp and sxp gains, but they also have drops only found here. These drops help you craft powerful gear to help your character not only progress further in the pathways, but also everywhere else! Check out the gear below to see what you can craft with these items that drop.

Additionally, each platform you clear will reward you with between 1 (Easy Difficulty) and 5 (Nightmare Difficulty) Denarii. You can bring these to Thorin in Valhalla (-shop) to purchase items to help you. This shop’s inventory will change over time but will always strive to have something to help with most goals! At the time of release, you can even get Blessed Limit Break Devices for a reasonable price!

Every 10th CONSECUTIVE platform will be a boss platform that spawns a boss on the 3rd wave. If you leave or log out, you will have will begin at platform 1 in regards to the boss platform again.

Lastly the Fame & Glory, the progress on the platforms is recorded and you can view your rankings for each difficulty on the leaderboards here: Ancient Pathways Leaderboards.

These new armor pieces reduce your EPL(Effective Pathway Level) by between 1 and 5 per piece! Click the icons to see more information including how much it will reduce your EPL!

11th Anniversary Earrings - These shiny new earrings are bolstered with the powers of the chip earring slot, which changes its passive boost daily. See the site’s right bar to see which buff is active right now for it!

Of course to craft all this new gear, we’ll need some crafting materials! ( Some of these materials will be to craft the new boss gear added in a future patch.

Denarii - This currency is obtained by completing platforms in the Ancient Pathways. Each platform you complete gives you between 1 (Easy Difficulty) and 5 (Nightmare Difficulty) Denarii. You can bring these to Thorin in Valhalla (-shop) to purchase items to help you. This shop’s inventory will change over time but will always strive to have something to help with most goals!

Vortex Chest: Skeletal - This box contains items to aid in crafting the Skeletal set. However you may get lucky and get an actual piece of the skeletal set!

Vortex Chest: Elmorian - This box contains items to aid in crafting the Elmorian sets. However you may get lucky and get an actual piece of one of the sets!

Vortex Chest: Bosses - This box contains items to aid in crafting the new Ancient Pathway boss items. However you may get lucky and get an actual boss item!