Mysterious What!?! Another Codex?!!!

This new feature is site based, its a monster codex that allows you to gain passive account wide boosts to all of your characters! It works by allowing you to use a new item type called Soul Stones to strengthen it’s knowledge about these monsters. Knowledge that it doesn’t share with you, but rather awards you with something called Codex Energy as each monster levels up. This Codex Energy is then usable in the Codex Shop to level up Codex Runes which each provide passive boosts to the characters on your account. This is a lot to process, so let’s break it down by each feature and give a deep dive to explain it!

Here are some images labeling the different parts of the codex pages to explain how they work. 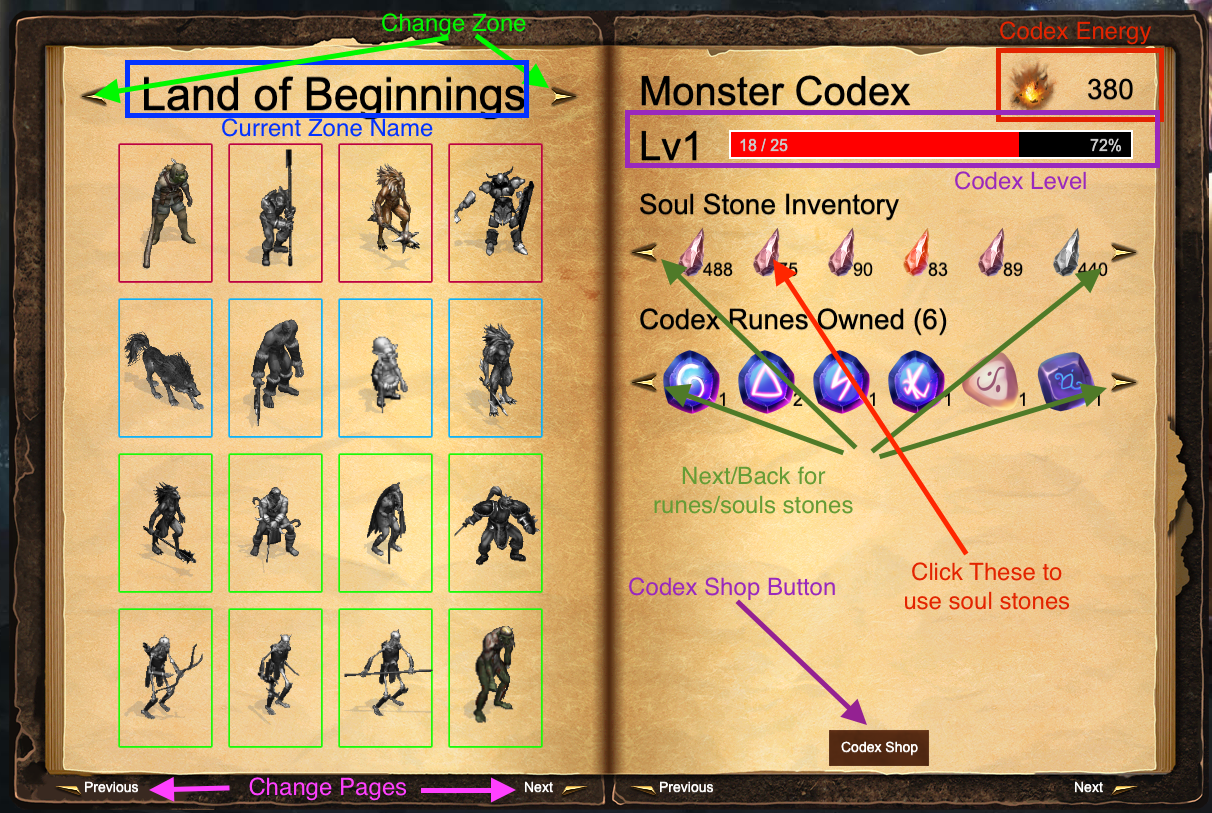 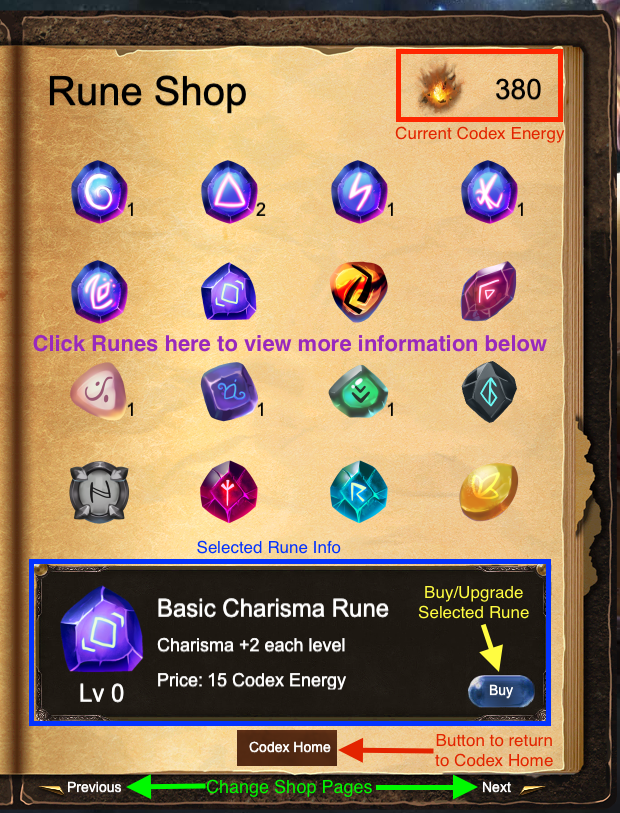 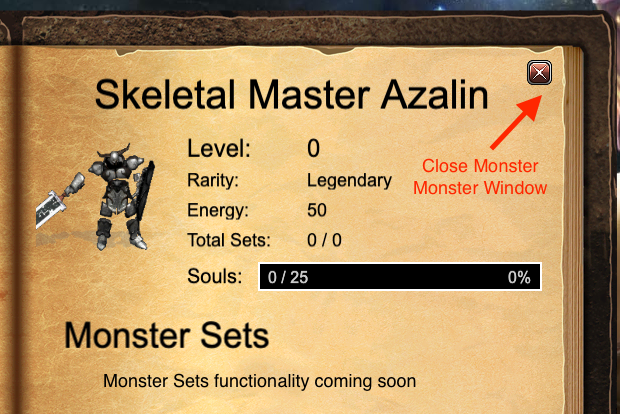 Soul stones are the life blood of the mysterious codex. They are vessels that carry information about the various monsters in L1.5 universe. Despite the name they do not carry the souls of the monsters, rather some unknown data trapped in its mineral form that the codex knows how to read. Soul stones come in two(2) forms:

Boss Soul Stones
These Soul Stones are dropped from the bosses they are named after. They can also be obtained via various events and mini games. When used by the codex they have a 100% chance of giving +1 exp to the specific boss that drops them in the codex.

When used in game soul stones are stored to the “Site Inventory” system (this is where many mini games store the prizes they give). Once in the Site Inventory, they can be found in the Mysterious Codex’s home page. When won from a mini game they are already located in the site inventory and can be used directly from the codex.

You can use 1, 5 or 10 stones at a time by clicking the number at the bottom right of this pop up. It will consume the amount you clicked to use and present the stones to be opened like this: 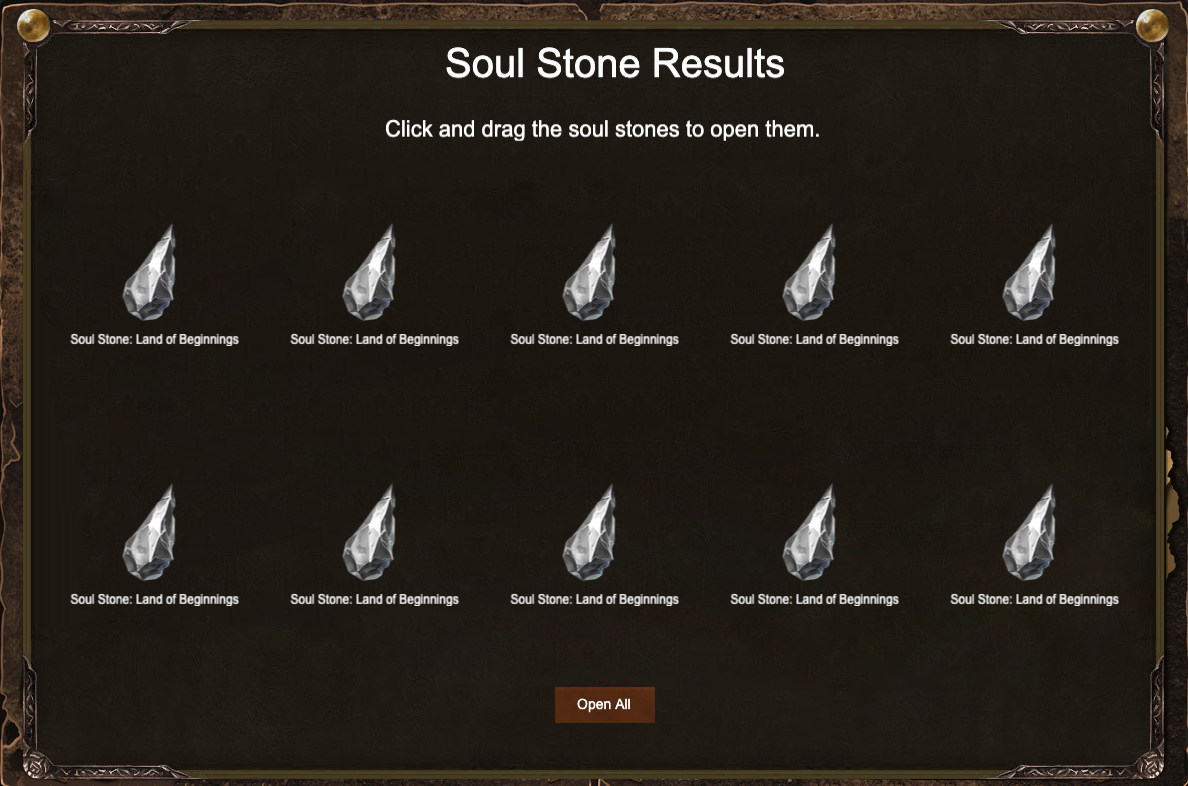 To open the soul stone, click and hold the mouse down on each stone until it charges up, then drag the mouse away from it until it pops open!

If you’re in a hurry you can also hit the “Open All” button at the bottom of the result screen as well to open them all instantly. Once opened it will give +1 exp to the monster that was in the soul stone. If it levels up, you will receive codex energy depending on the rarity of the monster.

The purpose of opening soul stones is to level up the monsters within the codex. You can browse the monsters by the zones they are in by clicking the tabs at the top. When you click on one it will open a page on the right that shows more information about that monster and it’s progression through the codex. You’ll be able to see how much codex energy it gives per level, the current level, and the amount of souls required to level it up next. When the monsters level up they also increase the total codex exp which can level up the codex which is important for buying runes. You’ll be able to get the stones for these monsters from hunting the areas they spawn in or by playing mini games or events that have soul stones for them.

At release there are 80 monsters from 5 zones and 5 rarities. These zones are as follows:

The monsters can be of different rarities each giving different amounts of codex energy when they level up. The rarities are as follows:

Codex runes are the purpose or reward for using this system. By obtaining them and upgrading them, you’ll gain passive, always active boosts to your characters. All characters on the account that your account will get these boosts and they are always active after you login to the game. If you collect a new rune or upgrade a rune, you may have to restart the game to apply its benefits.

At release there are 16 codex runes each with 10 levels. New runes will be added over time. You can see information about each of the runes by clicking on them in the codex shop.

The price of upgrading codex runes goes up exponentially each time it levels up so keep that in mind as its much easier to get a bunch of low level runes then to focus on one specific.

The starting runes are as follows:

Will all monsters eventually drop the stones in these areas? I hunted in several of the areas for about 5 hours yesterday and only the bosses dropped them so far. I don’t know what the actual drop rate is for the bosses but it seems to be about 10% chance. With very little data so far, I may be way off.

I have not updated the monsters drop since posting this, yes the monsters will all drop the stones for their area. I’ll make the change for them and push to the server (without a restart) shortly.

As for the bosses, depending on the boss, and the rarity of the stone, 10% is the normal rate. Good job estimating it!