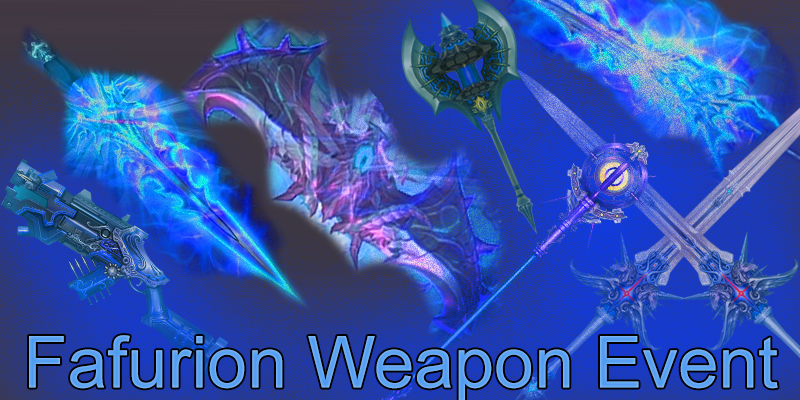 The Legendary Fafurion Weapon Event has started! These are the weapons that the grand prize winner of the Spring/Summer donation event will get to choose from. See the donation event post for more details on that.

The event weapons are available from the event npc Ives in Valhalla (-shop command in game to go there). You can also obtain the Dragon Enchant Scrolls and Dragon LB Device to enhance and max out these weapons quickly and easily allowing you to truly test these weapons.

Dragon Enchantment Scroll - This Item allows quickly leveling and enchanting the Dragon Event Weapons. This is the same as before with the previous events. No changes were made to the enchant or level up success rates. The only change to this item was the name, the icon and the ability to level up past 30 (to 40) if the weapon has been limit broken. Here are the details for those who have not got to do this event in the past:

Dragon LB Device - This item has a chance to increase the limit break on your Dragon Event Weapons if they support it. As of this post, only the Fafurion Dragon Weapons have the additional 10 LB Levels. To be clear, this item does not increase the level, just the level cap. To level up past 30, you still have to either gain SXP or use a Dragon Enchant Scroll. Here are some more details:

Fafurion’s Fin Blade - This weapon has been around for a few years, but it was lacking compared to the newer dragon weapons. This had to change! This weapon has been remade from nearly the ground up, even completely redoing its old low grade proc making it into a much stronger level 40 proc. The existing non event version of this weapon has also been upgraded with these changes. The purpose of the original was preserved, to ensure the target was drenched in water slowing it down.

Fafurion’s Scatterblaster - The first of it’s kind… A Lineage First Even… The Shotgun weapon! This weapon while technically is a crossbow, tends to act more like a shotgun dealing massive damage at mid ranges. The Shell type of magic arrows (meaning with no arrow equipped to the weapon) deals peak damage at 4.5 steps away and the damage goes down as you get further away from the hotspot. Anything closer than 2 steps and farther than 7 steps will still deal damage, but without any bonus damage.

Fafurion’s SS-XP 2000 - This weapon is modeled after the traditional Dragon Bow. It has the much loved Soul of Dragon Poly which will increase your damage the further away your target is.

Fafurion’s Waters of Mending - This staff doesn’t get standard abilities however it does get 2 spell items in addition to the Fafurion’s Blessing.

Fafurion’s CrestBreakers - These Blades are made to ride the waves flowing from their victims bodies. Just like surfing waves in the ocean, no two rides are the same with these blades. The procs set each other up so you can just enjoy the ride as you tear your opponents to shreds.

Fafurion’s Hydro Blade - This weapon is so in tune with the waters that with a swing of its blade, whirlwinds and vortexes of a powerful sort fly out surrounding it’s target.

Fafurion’s WaveAxe - This Axe is designed to protect it’s wielder with powerful bubles and shields. If that wasn’t enough it’s stats are also pretty high as well.